I'm freakin' gonna be a dad!

I know it's too early to start announcing the news to all my friends and family, so that's why I'm broadcasting this to the world. Otherwise, I'm just gonna go freakin' bonkers keeping this stuff all to myself.

Yes, and that's how we got here in the first place. We were trying to have a baby — not a dragon baby, any baby! — for over a year. You know, the natural way. Then the somewhat unnatural ways: leaving it in to make every drop count, putting a pillow under her butt, putting two pillows under her butt, making her stay in these positions for several hours, not letting her move for an entire night. 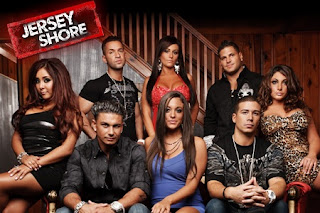 A year went by, still no baby. During this time, we went on romantic trip after romantic trip. Austin, Texas. Paso Robles, Calif. Napa Valley 1. Napa Valley 2. Napa Valley 3. New Jersey. Well, this one wasn't so romantic as it was a family trip to visit her grandmother in the hospital. We made a weekend of it, though, by taking the train into NYC. Unfortunately, we took the drunk train (last train out of NYC) back to our rental car in a Jersey suburb and got to experience the reality show as a reality, including a fight, three guys arrested, several pukings, a food fight involving pizza crust, dresses that were way too tight over bodies that were way too full (and how in the world do they keep from showing their coochies in those mini-dresses? wifee and I were constantly baffled!), a drug dealer who sat next to us while his three friends got arrested, a drunk girl in a skintight mini-dress who fell asleep on her seat while her goofy girlfriend went hunting for leftovers, three girls in the next seat who shot video of drunk girl while they made funny faces. Yeah, never again do we take the drunk train.

After my wife's grandma passed away, we had lunch in Koreatown with my wife's cousin. (Oh, wife's name is Sophie, cousin's name is Grace.) So their grandma had passed away and they were sharing some memories. Sophie remembered something her grandma said after waking up in her hospital bed. "Oh, you have a baby. But not right now. Later." Another time, she said to Sophie's mom, "You must be happy. Sophie has one son and one daughter." This last comment didn't make sense, and we began to wonder if she confused Sophie with another granddaughter who already had a son and daughter.

Grace mentioned she knew a couple who were having trouble getting pregnant. They went to a Chinese doctor in Rosemead and within a month of treatment, they conceived. Our ears perked up. This couple was pretty similar to us. The guy was Chinese, the wife was Korean. I'm Japanese, Sophie's Korean. They got married when they were pretty advanced in age, we got married when I was 42 and she was 34. We're now 46 and 38. Both of us checked out fine with our western doctors, and Sophie even had a few fertility treatments, but still no baby.

We made an appointment to see Dr. Xie at Del Mar Health Clinic in mid-December. We also had a cruise to the Bahamas, roundtrip from NYC, scheduled between Christmas and New Year's, so we didn't start full-on treatments until the first week of January. These treatments included acupuncture on both the front and back sides of our bodies three times a week, plus herb tea after each meal that the doctor and his wife provided. Dr. Xie doesn't speak fluent English, so his son Benjamin did the early translations. But after a few weeks, we were able to communicate fine with Dr. Xie and his wife, who also happened to be a gynecologist in China. Benjamin is also studying to be a practitioner in Chinese medicine, and apparently the schooling and certification process is very grueling, to say the least.

At first, Sophie and I met at the clinic after work around 6-ish during the week. But some evenings, the Los Angeles traffic was just too much, and we'd arrive closer to 7 or even 7:30. After a couple weeks of this stressful commute, we started to schedule our weekday appointments during our lunch break. This worked out much better.

By the way, if you click on the link above, you'll read my Yelp review of the clinic. In it, I mention Dr. Xie was so confident we would get pregnant that he used the word "guarantee." I work in the advertising business and we never use that word. Never. So when I heard him say that, I had no choice but to just trust him and let things happen. A bit of praying helped too, to say the least.

Finally, after Sophie missed her period, we started to wonder, Could she be pregnant?

You know those at-home pregnancy kits with the two pink lines that show up when you're pregnant? We did that after being about a week late. Twice, in fact, just to confirm what we were seeing.